The attacker in the email claims they have hacked the intended victim’s device and has recorded the person while watching pornographic content. The email also asserts that the video has not only captured the user’s behaviour in front of the webcam, but also which videos were played. 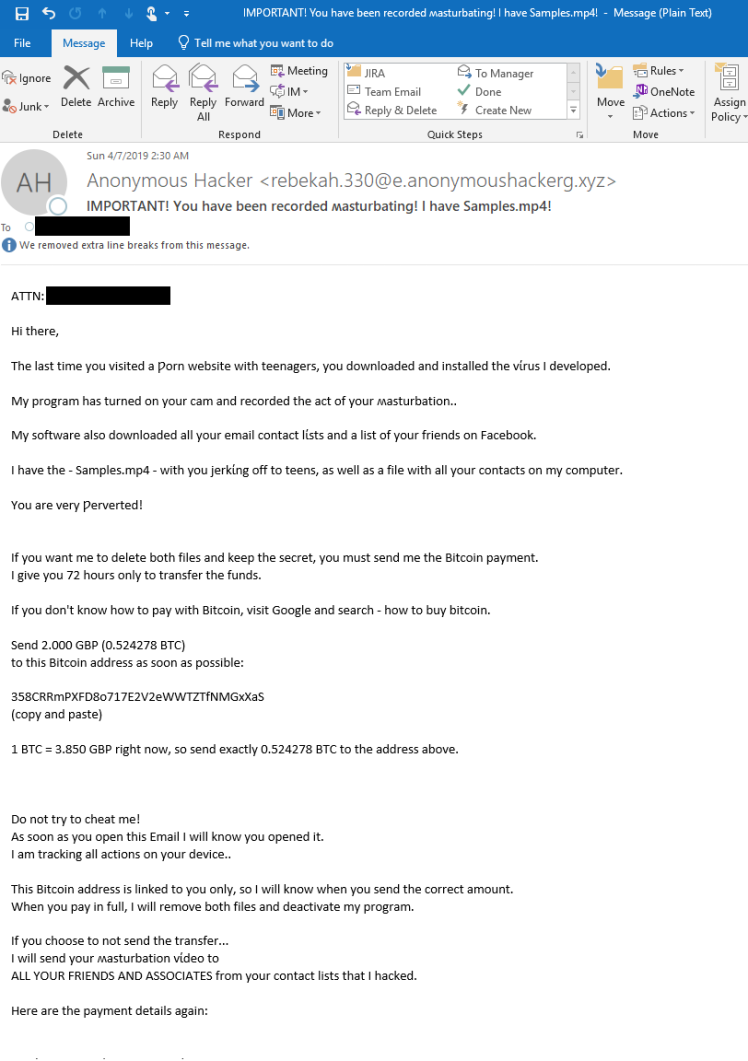 In order to conceal the compromising materials, the attacker asks for a sum of around 0.43-0.45 Bitcoin – €2000, however other messages asking for other amounts have also been seen. The victim is directed to pay within 48 hours of opening the email or the cybercriminal threatens to send the incriminating video to all the contacts he/she has managed to steal from the infected device.

In the previous waves detected by ESET, these sextortion scam emails were mostly in English, however in the last few days, we have seen multiple new localisations focusing on Australia, United States, United Kingdom, Germany, France, Spain, Czech Republic and Russia.

ESET is sharing news of this scam as a warning to the public. The scam is an attempt at extortion, and the attackers do not really have any such video of the victim. ESET protects its users from similar threats through its antispam technology.

Similar e-mail scams are nothing new and have been appearing for years. This type of scheme, where the attacker usually asks the victim for a cash ransom is called sextortion. Sextortion can also happen when an attacker has real photographs of a victim, for example, from an intimate conversation via a fake profile. It is particularly dangerous if the victim is a child.

What makes the current scam different from its predecessors is the effectivity of the social engineering involved, mainly thanks to its focus on users who secretly watch pornography on their devices. Some of the previous versions even made the (scam) email appear as if it came “from the victim’s own email address”, which supported the attacker’s claims about the hacking of the device. In an even older version of this scam, the attacker claimed to know the victim’s password, including it in the body of an email as evidence. In this case, the attacker probably obtained the data from some of the large data leaks which included billions of authentic login names and passwords. If a user has ever actually used the password mentioned in the scam, he can be scared into making a hasty payment.

The scam is also effective due to the sensitive theme of pornography. Many users secretly visit pages with pornographic content and the idea that their family, acquaintances, colleagues or business partners may learn about their behaviour is extremely unpleasant.

If you find such an email in your mailbox, act slowly, deliberately and avoid rash steps. First of all:

If an attacker lists your actual password, change it and activate two-factor authentication on that service. Indeed, in many cases, attackers actually test the login information and use the hacked account at least to spread their messages. Also, scan your device with reliable security software that can detect real infections and other issues, such as the misuse of the built-in webcam.