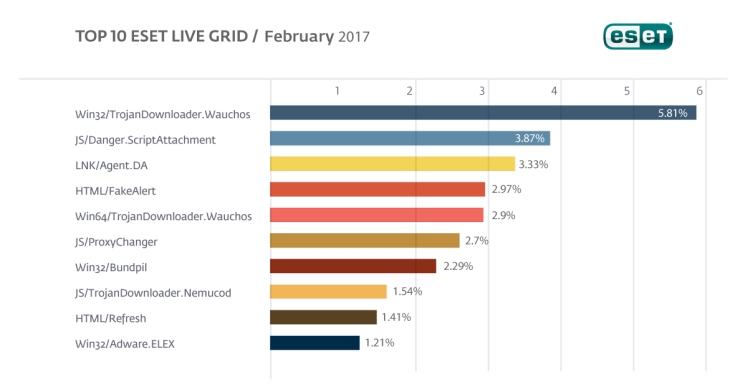 This is a Trojan which tries to download other malware from the Internet. It collects information about the operating system, including settings and the computer’s IP address. Then, it attempts to send the information it has gathered to a remote machine. It can download files from a remote computer and/or the Internet, run executable files, create Registry entries and remove itself from the infected computer.

JS/Danger.ScriptAttachment is a generic detection of suspicious e-mail attachments.

LNK/Agent.DA is detection name for a *.lnk file that executes the Trojan Win32/Bundpil.DF. The LNK file is part of a Bundpil attack and is created with the special name “%drive_name% (%drive_size%GB).lnk” on removable drives, convincing users that it’s a link to drive content. It actually points to %system32%\rundll32.exe with a Bundpil DLL component as a parameter.

HTML/FakeAlert is generic detection name for an HTML page showing a made-up, fake alert message, usually about a fictional virus infection or some other problem which is supposed to harm the computer or user’s data. The user is usually urged to contact fake technical support hotlines or download and execute a fake security solution from the Internet to prevent “damage”. This kind of page is usually used as a starting point for ‘Support Scams’.

This is a Trojan which tries to download other malware from the Internet. It collects information about the operating system, settings and the computer’s IP address. Then, it attempts to send gathered information to a remote machine. It can download files from a remote computer and/or the Internet, run executable files, create Registry entries and remove itself from the infected computer.

JS/ProxyChanger is a Trojan that prevents access to certain web sites and reroutes traffic to certain IP addresses.

Win32/Bundpil is a worm that spreads via removable media. The worm contains a URL from which it tries to download several files. The files are then executed and HTTP is used for communication with the command and control server (C&C) to receive new commands. The worm may delete files with the following file extensions:
*.exe
*.vbs
*.pif
*.cmd
*Backup

JS/TrojanDownloader.Nemucod is a trojan that uses HTTP to try to download other malware. It contains a list of URLs and tries to download several files from those addresses. The files are then executed. This Trojan is now frequently associated with ransomware attacks.

HTML/Refresh is a Trojan that redirects the browser to a specific URL serving malicious software. The malicious program code is usually embedded in HTML pages.

Win32/Adware.ELEX is an application designed for delivery of unsolicited advertisements to an affected computer. Usually, it alters the behavior (settings) of an Internet browser (for example adware sets its own “homepage” and setting back this value to original value is no easy task – the adware or a component of the adware is protecting this setting). Then the adware displays small windows with advertisements within the browser.