New survey by ESET Ireland reveals what terrible things befall the Irish with regards to their computers and smartphones. One in five Irish had laptop, smartphone or tablet stolen and over 50 per cent had a computer virus infection.

ESET Ireland, the distributor of ESET NOD32 Antivirus, has commissioned a survey to find out what endangers Irish computer and smartphone users the most. The research was carried out by Amárach research on 1018 Irish adults.

We asked Irish computer, smartphone and tablet users if they’ve experienced any of the following, and these are the results we got: 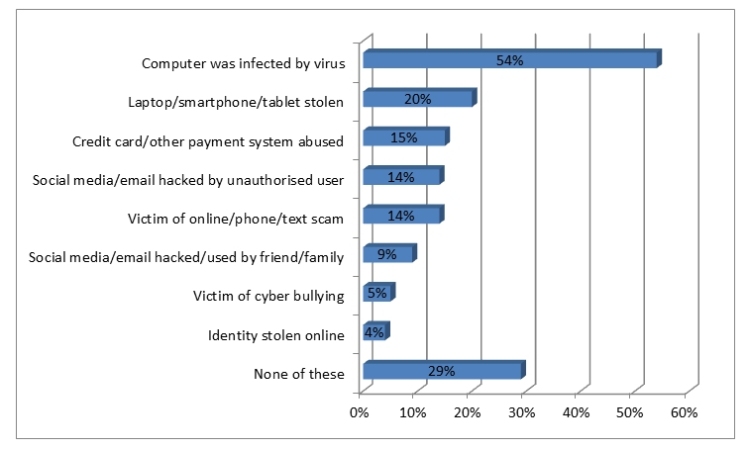 54% of Irish computer and mobile device users have admitted to having had their computers infected with various viruses. Although we have no way to prove the correlation with results of a survey we did a few months ago, where 45% of Irish computer users admitted to using free antivirus and 8% using pirated or no antivirus at all, these two numbers do add up to 53%, which being nearly exactly the percentage of the infected too, is an interesting coincidence.

We also didn’t quite expect the relatively high numbers of other distressing things that happened to Irish users. One in five had their laptop or device stolen, about one in seven had their credit card abused, their emails or social media account hacked, fell victim to a scam and 4% even had their identity stolen online. With over three million estimated Internet users in Ireland, we can guesstimate that up to a half a million people were victimized in this way.

A smaller, but not negligible 9% of people have also been victims of unauthorised use of their emails and social media by friends or family, colloquially known as “fraping” (a combination of Facebook and rape), something that usually occurs when people forget to log out. While usually only used to embarrass the victim and not for serious cybercrime, if it occurs with malicious intent among children, it can also be classified as or lead to cyber bullying.

Here it stops being funny, as 5% of all surveyed have admitted to being victims of some form of cyber bullying. Since the survey includes all age groups, the group most affected needed to be looked at more closely. And in the demographic breakdown the age group 15-24, a shocking 13% have said they were cyber bullied. Since the phenomenon is predominant in even younger age groups, we can imagine the results of a survey focusing only on teenagers would give even scarier results. This should be very worrying for parents and teachers across Ireland. Over a year ago, we did a survey where we asked Irish parents if they leave their children unauthorised online, and with up to 73% of children being left unsupervised, we find this very concerning, since Ireland has had some very publicised experience with cyber bullying.
Anti-theft and anti-scam technology can counter these threats, but can’t take over common sense and parenting responsibility

The high level of laptop and device theft is one of the reasons ESET introduced anti-theft GPS tracking technology to the latest version of their security products. To combat scams, ESET introduced anti-scam monitoring as well. But just like with all the safety features in a car and on roads, most still depends on the driver. With computers it is no different. ESET cannot make users be more responsible with their credit card info online, nor force them to use safer passwords to prevent email or social media abuse. We can also not make people log out of their accounts or falling for scams if they ignore the warnings. And most importantly, no software can replace actual parenting or prevent children bullying each other, if those responsible don’t go about it in a cyber-aware manner themselves.

Online security is more than just installing an antivirus and a firewall. It is also knowing about threats and staying informed, as well as acting responsibly when using computers, smartphones and other devices, since, as can be seen from the statistics above, threats come in many shapes and forms and some can also have terrible consequences.