ESET Ireland survey: Up to 73% of children are left entirely unsupervised online.

The recent Co. Donegal and Co. Leitrim tragedies, where two teenage girls committed suicide because of online bullying and abuse, reminded us in a most dreadful way that the web isn’t just a nice place of Google searches, YouTube videos and friendly Facebook wall posts. Online life, just like regular life, has its shady sides as well. But while we’re taking many measures to stay safe in real life, the online life is considered less important by most. At least until something tragic occurs.

These horrible events prompted us to attempt raising awareness of the issue once again in hope something does change for the better, and remind the Irish public of the survey we had conducted about a year ago. ESET Ireland had a survey done with over a thousand people participating across Ireland, to find out if Irish children are supervised online. The results were shocking as they revealed that up to three quarters of children are left entirely unsupervised online.

Question: Is your child left unsupervised online?
The graph shows how many parents of children of a certain age said YES. 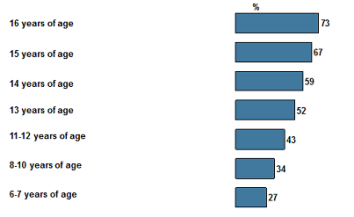 It is hard to imagine that a third of 6-7 year olds and three quarters of 16 year olds receive absolutely no supervision from their parents while online, when it has also been brought forward by other researchers, that just over one in ten will accept any friend request on social media, and nearly half of them have friends they have never met.